HAS and the municipality of Oss developed the Bachelor Class 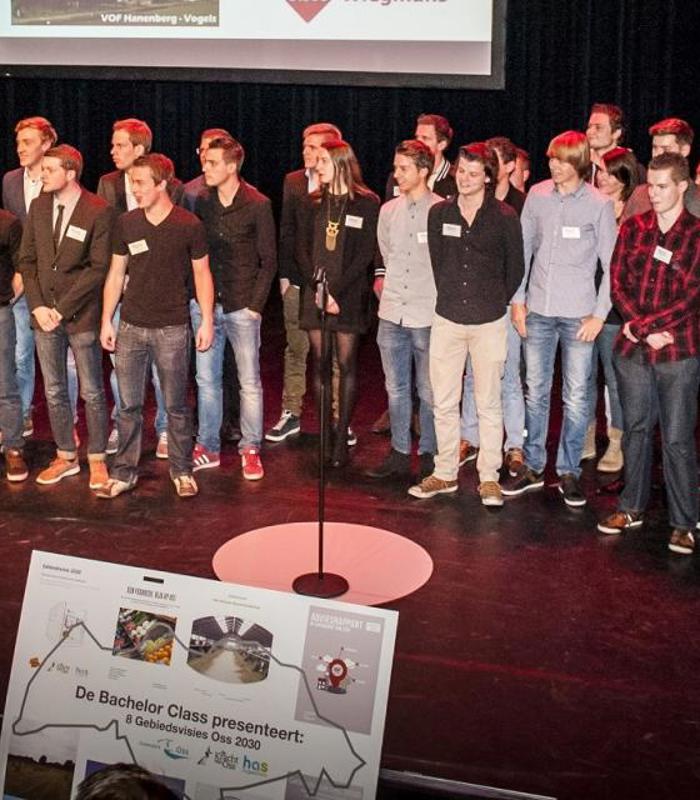 The municipality of Oss is an urban core with considerable industry, in which the entire agrifood chain is present. Oss is continually searching for new ways to strengthen the region, for example by putting companies and students in touch with each other, in order to make new connections. HAS University of Applied Sciences is one of its partners. This resulted in 2 remarkable projects, one of which is the Bachelor Class.

“The Bachelor Class is a new innovative education project within HAS University of Applied Sciences.” project leader Cindy Hagenstein of the municipality of Oss explains. “Within the project, 43 third-year students from 6 study programmes developed their vision on the use of space in Oss and the surrounding area in 2030. The client was ‘De Kracht van Oss’, a collaborative effort between the municipality and local business associations. Agrifood Capital was also closely involved with the project. During the project, 8 Oss-based entrepreneurs formed the agrifood chain and inspired students in shaping their vision for the area.”

“Oss intends to be a breeding ground for talent,” says Mayor Wobine Buijs-Glaudemans. “We want to bring in the younger generation. They have a refreshing way of thinking and excellent professional skills. It is a motor of innovation for the community. Oss and HAS University of Applied Sciences are on the same wavelength, which is why our collaboration does not stop at the Bachelor Class. We want companies to automatically think of HAS when they have a query. That way, we can learn from each other and further develop the region together.”

As their external project space, the students made Oss library their base for 10 weeks. They formed 8 project groups on the basis of a pitch from 8 Oss-based entrepreneurs. Their mission was to form a picture of the use of space in Oss in 15 years’ time and to develop a regional vision for a new business landscape. They looked at commerce, the labour market, infrastructure and the housing/living environment. The project was concluded in style in Theater de Lievekamp in Oss, where students held their presentations in the main hall.

Contribute your own knowledge and experience

The Bachelor Class worked on a cooperative basis: all parties involved brought their own knowledge and experience to the project. Cindy: “In the course of several months, the project grew and grew, and I am proud of what we achieved in such a short period of time, especially with so many stakeholders. Students left their comfort zones and companies gave full openness in order to help the students as much as possible.”

Rob van Roosmalen represented HAS University of Applied Sciences for the Bachelor Class, and states there was a strong connection because both organisations have solid roots in agrifood and because HAS likes to work with innovators. “According to us, Oss is such an innovator. The way in which it is thinking about agrifood and about Oss’s position within the industry is fantastic. Oss does not just think of tomorrow but rather takes a long-term view. The municipality likes to contribute ideas and brings up its own issues. HAS is also engaged in other projects with companies based in Oss and the municipality often plays a crucial role.”