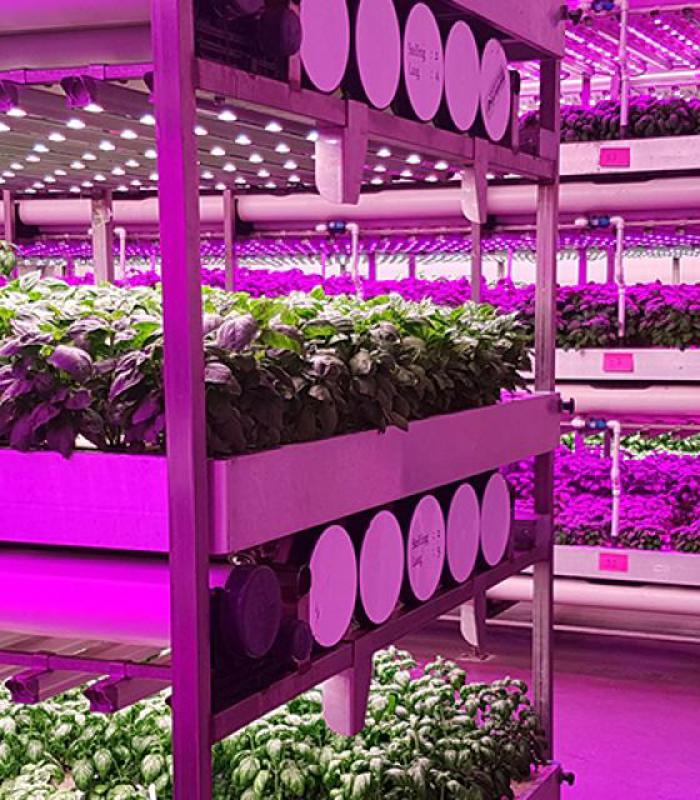 He then started travelling. This spring, he returned to the Netherlands temporarily before heading out to China to start an interesting new job setting up a vertical farm at a large company there. As his new position doesn’t start until 2020, Pim is bridging the gap with a temporary job at HAS University of Applied Sciences, where he is back carrying out research at BrightBox.

Pim presented the results of this research, which focused on basil varieties and light recipes, during a celebratory event on 13 November to mark the 5th anniversary of Brightbox. The research is a real showcase for Brightbox and for the lectureship New Cultivation Systems of Jasper den Besten, for whom Pim carried out the research. Brightbox generally carries out research for customers, but Jasper wanted to set up a project himself that he could then share externally.

Pim studied 22 pot basil varieties in combination with 4 light recipes. Pim: “Normally, growers already have a certain variety, and you research which light recipe best suits a particular variety. In this research, the approach was the other way around: we used the 4 standard light recipes present in the demo cell at BrightBox and applied them to a large number of varieties, to see how they reacted to the different recipes. We were looking for the best combinations, because not all varieties are even suitable for a closed system. We also calculated the production per plant. For the supply of the different varieties, we approached various companies in the Netherlands and abroad. They will also have access to the results, and we hope to make them so enthusiastic that they’ll want to do follow-up research with us: in the context of 'open innovation'.”

And the results? “There were huge differences between the plants,” Pim explains. “This is what we expected, but now we can prove it. You have to see it as a big puzzle of breeds and recipes. We managed to put some of the pieces in the right place. We're still a long way off being finished. Hopefully, the lectureship will be able to continue working with the sector to test particular varieties in the future.” The biggest challenge for the research was harvesting the plants. “There were almost 9,000 plants in total in Brightbox. Seventeen students helped me harvest them and separate the leaves from the stem.”

Jasper: “Vertical farming is becoming increasingly important worldwide, but no varieties have yet been developed for this food production system. The varieties that do exist are almost never tested under LED lights. Researchers prefer to change the light settings, while the choice of the best variety gives enormous benefits relatively quickly and simply. The production of the best variety is often 2 or more times as much as that of the inferior varieties. Under controlled conditions, you can tell after 1 cultivation round - in this case 28 days - which varieties you should or should not use. So, this is really a case of underappreciated ‘low-hanging fruit’.”

What Pim likes about this kind of research is that it's really an experiment. “It's a search based on trial & error. I only came into contact with the plant sector and multi-layer cultivation towards the end of my studies, but since then it has really fascinated me. I’m proud that with this research I’ve been able to contribute to the development of a fairly new cultivation technique. This experience is something I’ll be taking with me to China.”